Hummingbirds are the tiniest of birds that's very difficult to see while they dash from flowers to flowers, batting their wings as they hover, feed and pollinate their favorite plants.  There are four species that are indigenous to Jamaica, and our national bird is the crown jewel which is the streamer-tail. 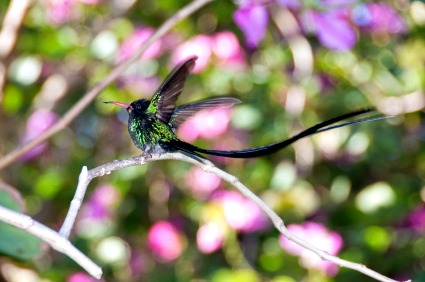 They boasts shimmering emerald feathers, a velvety black crown with purple crest with a long slender curved tail-feathers. Known locally as the 'Doctorbird" because of its long-bill which resembles a 19th century surgical lancet.

Seen as having magical powers, these magnificent dazzling and colorful birds were regarded by the Arawaks, our first inhabitants to the island of Jamaica, very superstitiously.

These birds are part of Jamaica's circulatory system, pollinating the earth's resources between tropical and temperate ecosystems thousands of miles apart. Without there pollination services many wild flower and trees would not be able to reproduce without these magically birds assistance.

So the inter-dependencies and Jamaica's structure of flowers, woodlands, plants, forest, definitely makes them our national treasure.

Attracting Hummingbirds To Your Feeder

You too can attract them to your garden, if you create a favorable habitats and put up the right feeders. The bright red base with the yellow bee guards seems to attract these birds and at the same time keep the bees out.

, placing it close to the flowers to which they are attracted to, fill the feeder with a sugar-water solution and hang.

You can purchase or make your own mixture - I prefer making my own its easy and economical.

Boil for 1 to 2 minutes. Then cool and store extra in refrigerator.

I was told that sugar was preferable to honey because the flower nectar contains three types of sugar - sucrose, glucose and fructose which is mostly sucrose which is in sugar.

This alone is not their diet but they get their nutrition by eating many other things like small insects and spiders through-out their travels.


Another reason not to use honey or artificial sweeteners is because it can be fatal to these birds because of fermentation.

Return to Jamaican Culture from Hummingbirds